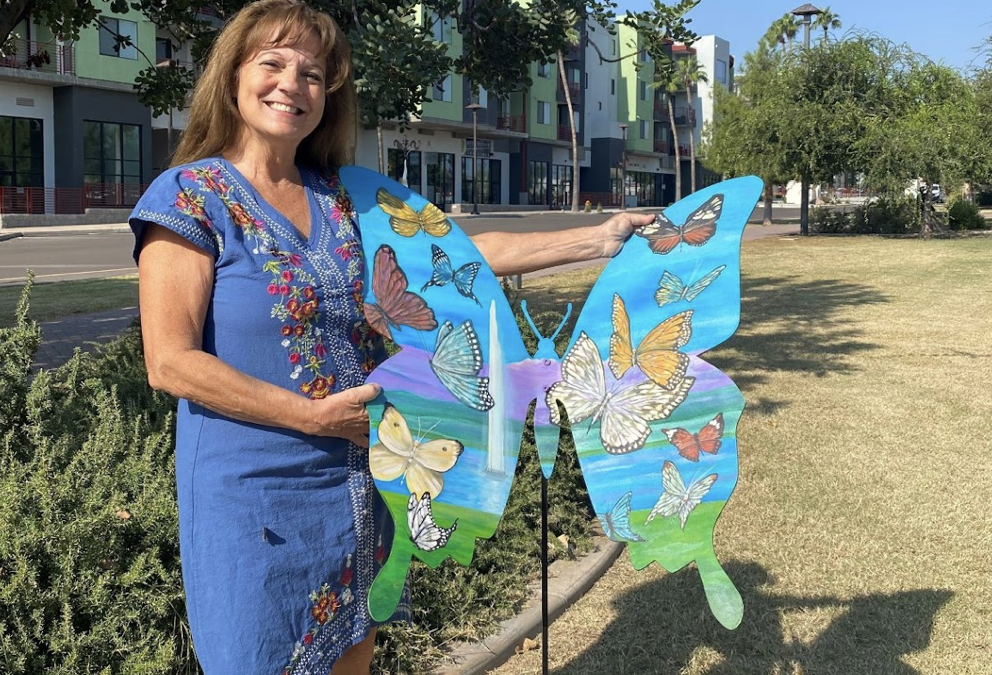 Vanessa Davisson’s Flutter Fountain was the judges choice as the 2021 Raffle Butterfly for Flutter at the  Fountain.  Vanessa is one of Fountain Hills most well-known—and prolific—artists.  She is a 40+ year resident of Fountain Hills with her husband Dan, where they have raised their three kids.  This is Vanessa’s second year as an artist participant in Flutter at the Fountain.  In 2020, she created two crowd favorites:  Tuterfly and Psyche.  Vanessa also was creator of the Flutter logo!

Her inspiration behind Flutter Fountain was simple…she is a big fan of our world-famous fountain, having painted it in many different versions throughout the years.  Flutter Fountain is a stunning portrayal not only of the Fountain, but also of the variety butterflies that grace our region.

Vanessa has been a professional designer, muralist, educator and illustrator for since 1979. She holds a BFA in Illustration and Advertising Design with a Minor in Photography & Painting from Syracuse University (NY).

She received her Master of Arts Degree in Art History at ASU in 2009, with a concentration in the High Renaissance in Ferrara, Italy, specifically in the paintings of Benvenuto Tisi da Garofalo, the court artist to the Este and the most prolific of the Renaissance Masters. She has traveled extensively throughout Italy, Europe and Egypt and is proficient in translating ancient vulgate Italian.

As a professional muralist and faux finisher, she has painted walls and ceilings commercially and residentially throughout Arizona and in her native New York. Her paintings have been selected numerous times for the Foothills Juried Competition and the FH Juried Competition, where she achieved multiple blue ribbons in painting and mixed media. She is proficient in restoration and preservation of paintings, having studied the techniques at the Pinacoteca in Ferrara, Italy.

A founding member of Fountain Hills Community Theater, and 20-year member of their Board of Directors, she painted their sets for 20 seasons. As a scenic artist she has rendered the sets for many other theaters, including Phoenix Theater, Arizona Jewish Theater, Hale Theater Center,

Valley Youth Theatre and Black Theater Troupe, painting over 100 sets since 1988. She has won two Prizm Awards at FHCT and has been nominated for two Arizoni Awards for set design.

As a graphic designer and illustrator, she has created hundreds of logos, menus, brochures and other marketing materials, illustrated all of the Fountain Hills cartoon maps, and has designed and illustrated several children’s books and medical legal textbooks for publishers in several states.

Currently, she is preparing to deliver two art history lectures and a full day class to teach fellow professionals at the International Decorative Artisans League, an honor she is thrilled to receive.